“The RegTech industry is alive and it is moving forward” 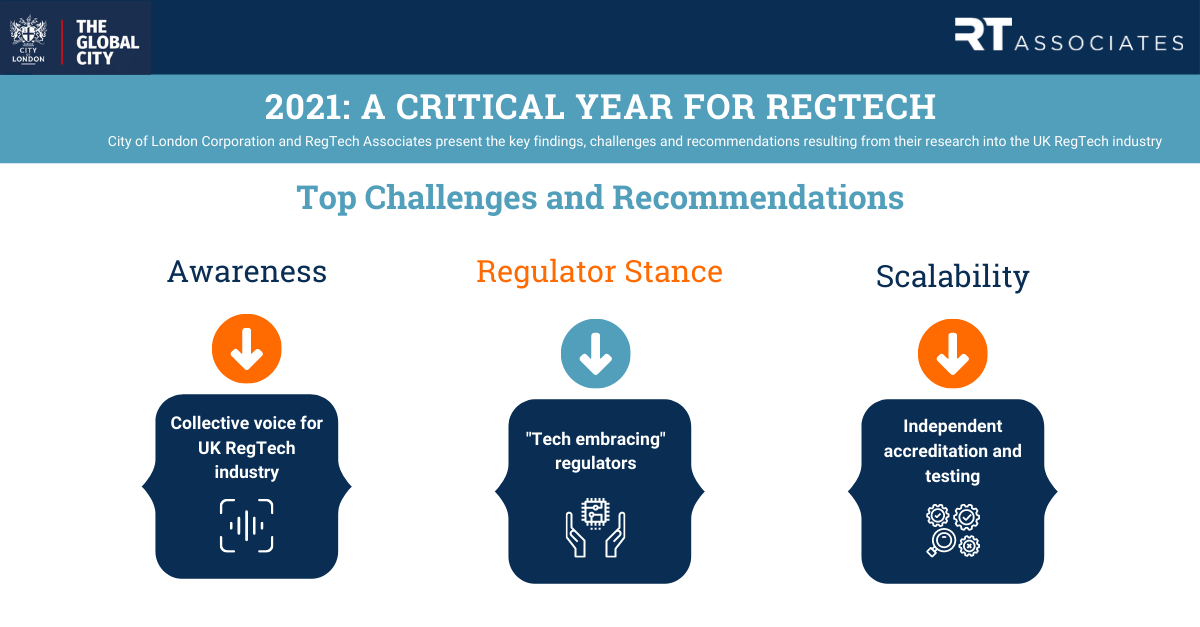 This was the verdict from Sheldon Mills, Executive Director, Consumers and Competition at the Financial Conduct Authority during a panel at the launch of our research report on UK RegTech, written in partnership with the City of London Corporation.

We very much echo this sentiment and the research we did for this report backs this up with optimistic outlooks for revenue and performance in 2021 for RegTech vendors. Despite this, however, many barriers to the adoption of regulatory technology still exist and this report focused on these challenges and made a set of recommendations as to how they could be overcome.

We presented these findings and recommendations at the launch event on 16th April and these were also the topic of discussion for the panel, which comprised

Much of the conversation during the panel focused on the recommendation for regulators to adopt a more ‘tech embracing’ stance. Both the FCA and the Bank of England have been pioneers in how they are experimenting with technology to achieve their own objectives – an example being an internal cognitive research tool which the Bank of England is using to support its supervisory and other teams.

However, Sam Woods and Sheldon Mills agreed that it is just not feasible for regulators to have intimate knowledge of every regulated firm’s technology stack and the details of where each firm is in their technology journey. Speaking from a financial industry perspective, Adriana Ennab suggested that what firms are seeking is some reassurance and guidance from regulators in terms of implementing more innovative technologies.

Acknowledging this, Sheldon Mills said that the FCA “does have an obligation, in an agnostic way, to ensure that where there are new possibilities such as data and technology to tackle some of the regulatory and compliance challenges facing firms, that it it important for us to be part of that debate and be part of ensuring that the solutions come forward”.

Cross-industry collaboration, such as that demonstrated in the Digital Regulatory Reporting project, a joint initiative between the FCA and the Bank is a fantastic example of what can happen when the regulators, the industry and technology vendors come together to solve a problem. After all, as Adriana said

As a successful founder of a RegTech firm, Joanne Smith explained that over two thirds of RegTechs headquartered in the UK have less than 50 employees and some of the barriers to adoption, such as long procurement cycles within financial institutions can make things very difficult for these smaller firms.

On the subject of buyers of RegTech, there are several obstacles to overcome when trying to make the business case internally within financial institutions. As Adriana described, “often products solve one small problem, rather than providing an end-to-end solution – if these products are not scalable or leveraged in other places within the business, they are often seen as a ‘nice to have’ rather than a ‘must have’”.  One way of addressing this would be for RegTechs to come together to create that more comprehensive solution – another call for collaboration.

What is missing, however, is a central body or organisation that would be able to coordinate this collective action and the report is very clear in calling for the UK RegTech industry to come together and have a stronger voice and support mechanism. This would be welcomed by both the regulators and regulated firms – as Sheldon Mills said “it’s up to the market and this report is a call to arms for RegTech vendors to go out and make that happen”.

We couldn’t agree more and look forward to continuing to work with the RegTech industry to fuel its growth and ultimately make the financial system stronger and more stable with better outcomes for customers and investors.