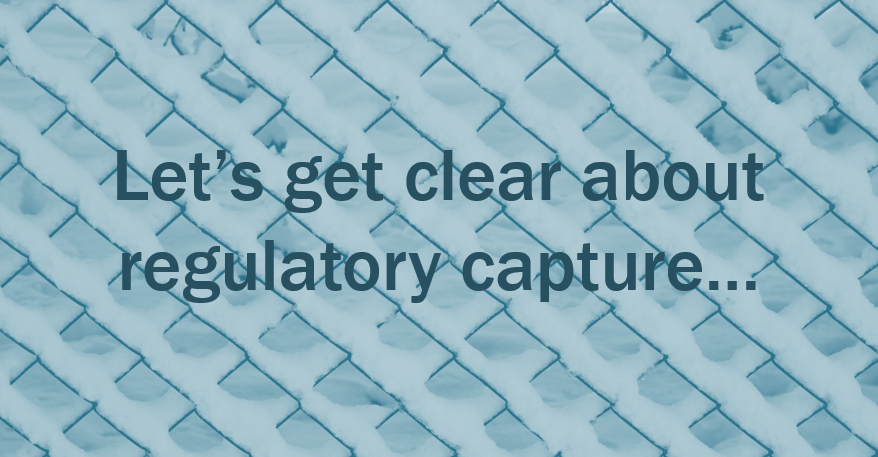 Earlier this month we were asked to comment on the Danske Bank money-laundering scandal and the accusations that had been levelled at the Danish Financial Supervisory Authority of regulatory capture. This scandal is a salutary tale of whistle-blowers being ignored, of (perhaps) blind eyes being turned and potentially, regulatory forbearance in a situation where really the watchdog should be not only baring its teeth but biting.

Regulatory capture is commonly understood to occur when regulated firms or industries pressure regulators, supervisors or policy-makers to create or enforce regulation in a way that benefits the industry rather than to meet the regulatory objectives – such as reducing risk or correcting potential market failure or protecting consumers.

The Dankse Bank scandal involved over 200bn EUR of non-resident money passing through the bank’s Estonian branch between 2007 and 2015. Despite the former Head of Markets in Estonia, Howard Wilkinson, blowing the whistle in 2014, investigations were only seriously pursued in 2018 following the forced resignation of the bank’s CEO. Danske Bank is currently facing criminal investigation by the US Ministry of Justice amongst others, with some estimates of the possible fines as much as $8bn.

This is where the issue of regulatory capture itself bites – the CEO of the Danish FSA has stated that the speculation about the levels of fines are overblown, given the cooperation of Danske Bank and the ‘draconian’ measures taken to shake up senior management (the CEO resigned and the largest shareholder, Maersk family, insisted the Chairman was also replaced).

In this case, the ‘capture’ seems to be associated with the so-called revolving door between the financial industry and the regulators – the previous Chairman of the Danish FSA (until May 2018) was a former Finance Director at Danske Bank. On the flip-side, defending the FSA against the accusation of capture, its Head, Jesper Berg argued that in order to regulate properly, the FSA needed to employ people who had deep, practical expertise of financial services.

So which is it? To be able to answer that question, we need to interrogate this idea of ‘regulatory capture’ more thoroughly – which means engaging with some of the theoretical and academic roots of the term. Theories of regulatory capture have their roots in the political economy of the Chicago School, with economists such as George Stigler (1) arguing that special interests (read – industry interests) will seek to alter or influence policy away from the public interest and towards their own by supplying money or biased information to direct policy to a certain outcome. Others (e.g. Laffont & Tirole (2)) suggest that the payment of campaign contributions in the US is a mechanism of regulatory capture.

Some of these earlier conceptions appear less applicable but more recent scholars (such as Kwak (3)) have explored more nuanced and less materialist means by which influence is achieved – subtle forms of ‘intellectual’ or ‘cultural’ capture, where influence is exerted ‘through a set of shared but not explicitly stated understandings about the world’ such as relationships, status and group identification. The outcomes produced are the same as more traditional understandings of capture – ‘regulatory actions that serve the ends of industry’. The idea of the ‘revolving door’ is one such example of this mechanism (Makkai & Braithwaite (4)).

However, if it was difficult to identify and prove the causal links between influence and policy outcomes in the more economic views of regulatory capture, it is even harder to do so in the case of cultural capture. This ability to demonstrate or evidence a policy shift away from the public interest is at the heart of most recent debates about regulatory capture. In their influential book, Daniel Carpenter and David Moss (5) define capture as

‘the result or process by which regulation, in law or application, is consistently or repeatedly directed away from the public interest and towards the interests of the regulated industry, by the intent and action of the industry itself’

This definition provides us with a good frame of reference to measure the accusations of the Danish FSA being captured by Danske Bank. Yes, there is a situation where a former Danske Bank employee has entered the regulator via a revolving door. Whether this is the reason why the Danish FSA has been seen to be (fairly) lenient in its sanctioning of Danske Bank to date is much harder to prove.

Of course, in a real-life context, we do not appeal to theoretical definitions to make our judgements about the objectivity of our financial regulators. There are good reasons for close interactions between financial firms and their supervisors – sharing of information and expertise, guidance on the application and relevance of regulatory standards and the fostering of constructive relationships which benefit the financial industry as a whole. However, the need to implement measures to stop the regulator and industry from getting too close for comfort is made clear by the Danske Bank case. Regulatory capture might only be a perception rather than the truth but regulators should be mindful of these risks as they engage the industry more closely around the innovation agenda.

(4) Kwak, J. (2013). Cultural capture and the financial crisis. Preventing regulatory capture: Special interest influence and how to limit it, 71-98.